Every year during Lent I usually watch parts of The Passion of the Christ to facilitate my meditation on the suffering and death of Jesus in order to more consciously enter into Good Friday and Easter Sunday. I began watching it again the other day and was reminded how much I appreciate that flashback to the home at Nazareth. You know, the scene in which Jesus in the carpentry shop finishing up a wooden table for one of his clients, probably a foreigner as the lighthearted son and mother dialogue suggests. It’s pretty clear that Jesus is a skilled craftsman and knows how to work hard. This was a natural human talent that he acquired––his foster father St. Joseph taught it to him. That scene the from the movie can be seen as a credit to St. Joseph even though he’s not in it. Even though he is silent in the pages of the Gospels, the role that he played in the life of Jesus and Mary, in the Holy Family, is definitely recorded and provides material to fill in blanks. 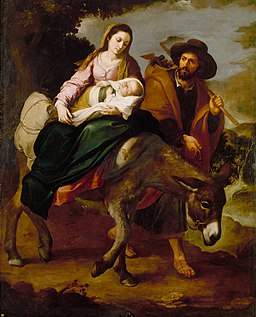 Evidently, St. Joseph was the kind of person who listened more than he spoke. He listened and obeyed. Because he was “a righteous man,” he wanted to follow the law of God even though it meant the silent separation from his betrothed. And because he was a good man, he didn’t want to put the Blessed Virgin to shame even though she was unexplainably pregnant. When the angel tells him to take Mary as his wife, he gets up and does right away. After Jesus was born, circumcised, and redeemed with the sacrifice of turtledoves as it was prescribed, St. Joseph took his family into Egypt after listening to the angel again in his dream. I think that no words of his are recorded in order to show how faithful he was, that he listened and acted, doing what God wanted him to do, right away. Another movie with a good depiction of St. Joseph is the 1977 movie Jesus of Nazareth. I like the scene where he’s got the Christ Child and tells him about God, pointing up at the stars.

He didn’t need to teach Jesus anything, because he is God after all, but he chose to be able to learn––which is pretty incredible to think about. I think some early church writers marvel about how St. Joseph taught the Word how to speak, held the one who created the universe in his arms, saved the Redeemer, Life itself, from death. Pretty crucial stuff. Jesus needed a human father just like all kids do. Because he was such a loving dad, the devil was in the dark about the Infant Jesus’ Divine origins according to some… that’s probably why some prayers like the Litany of St. Joseph refer to him as, “Terror of Demons!”

Well I can’t say that I really cared about it as a whole, the movie “Nativity Story” also had a good depiction of St. Joseph. I like how it took the time to imagine the Holy Family’s journey into Egypt and what they must have had to endure––something that can’t be overlooked. St. Joseph did indeed have much to suffer, physically, and mentally as well, traveling to an unknown country to flee for your life, along other difficult situations before and after that. The movie didn’t gloss over the hardships and the sacrifices that St. Joseph made to keep his family safe. I think it caused audiences to really think about someone who was indisputably one of the closest people to Jesus. “Nativity Story” is commendable because of the way the movie filled in the blanks as far as the human father of Jesus Christ goes. Other than that, the movie pretty much stunk I have to say.

Jesus and Mary would have talked about him and the time that this, that, or the other thing happened. It goes without saying that they would have missed him a lot. St. Joseph was blessed to have them present in his life, especially at the moment of his death, which occurred before Jesus’ public ministry. If he were still alive, he would have certainly been at the foot of the cross too. Maybe, in a way, that’s why his Feast Day almost always occurs during Lent.