It’s the most wonderful time of the year and I’m not feeling it. While many people here in the United States have been celebrating Christmas since Thanksgiving, under the commonly used (and often over-used) term, “holiday(s),” I’ve been struggling to live Advent. Now that Christmas is tomorrow, I still feel unprepared.

For the past 2 Advent seasons, I’ve had difficulties that tend to divert my attention away from full, prayerful, conscious preparation. Last year, it was a new power wheelchair that I couldn’t use––and still can’t use, current whereabouts unknown. This year, the issue is having nursing hours cut by 4. It’s not easy dealing with the situation––by the time I’m in the wheelchair, it’s practically time for the nurses to leave. Along with that, one of my best nurses is away for a while and may be going back to school soon. All of the events of the past a few days and weeks have caused me to become uneasy, anxious, and a little sad.

The pain that some experience during this time of year is something, i can relate to. I’m facing the reality of my own brokenness, dependency, and helplessness. And maybe that’s a good thing, maybe it’s an entry point into the very meaning of Christmas…

Jesus Christ, God–made–man, sees my poverty and meets me there. He was not born in a resplendent palace, he wasn’t born in a kingly household––he was born in poverty, in a lowly stable, a cave, a feeding trough for animals. There wasn’t even room for him in the inn! (“He came to his own and was not received by his own,” is one of the saddest statements in the New Testament.) Who was he revealed to, at the outset? Not to the ruling class. Poor shepherds. These were people who practically lived outdoors and smelled like sheep. Outcasts.

And the angel said to them, “Be not afraid; for behold, I bring you good news of a great joy which will come to all the people; for to you is born this day in the city of David a Savior, who is Christ the Lord. And this will be a sign for you: you will find a babe wrapped in swaddling cloths and lying in a manger.”

The poor baby in the cave was a sign to the shepherds, a sign that God was with them, quite literally. But he’s not just a sign for them but for all. God is for us, he is with us in our poverty. I think of him saying to me, personally:

“Look at me, see how small I have become for love of you. Do not be afraid to approach me. Yes, you are helpless and dependent––I too was dependent, unable to move, wrapped in swaddling bands. I had to be clothed and fed and carried (by my mother who took such good care of me).”

When we think about the suffering of Christ, we usually focus in on the cross–rightly so. But Jesus suffered in Bethlehem as well. God, He who is all sufficient in and of himself, became poor for our sakes. He who is limitless was constrained, exposed to the cold, prickly straw, stinking stable. He united himself with our humanity so that we could be united to his divinity. 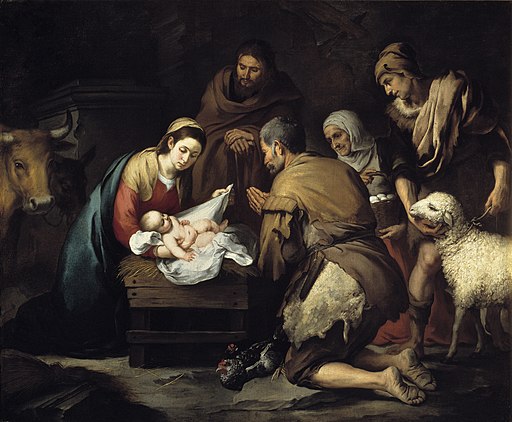 During these past few Christmas seasons, I’ve found myself relating more to the shepherds, the animals, the straw in the manger. At the same time, I can unite myself to that little child shivering in the cold––I can identify with him who 1st identified with me. God became poor. He who created the entire universe! He entered into my poverty. He entered into my loneliness and fear so that I wouldn’t feel alone or afraid. All he wants in return is to be loved, because, who doesn’t love a baby? (Sadly there are some who don’t.) He wants to be loved, often in and through the defenseless, the poor, and the forgotten.

Again, He manifested Himself as poor to the poor shepherds, as a sign to them.

The point of all my disjointed rambling is that God is with us, he knows what we go through because he chose to go through it himself. He is in solidarity with us, and we with him if we so consciously choose. By acknowledging our weakness, we identify with the suffering infant of Bethlehem who suffers in order to identify with us. God is with us. Are we with him? We can console that Child in the manger—He who became man, limiting Himself to be in solidarity with us. Making another’s suffering one’s own—this is a definition of mercy… taking another’s suffering into one heart… a heart for the miserable. And if we get this we get what Christmas is really all about.