Easter Reflections on this past Sunday’ Readings at Mass: 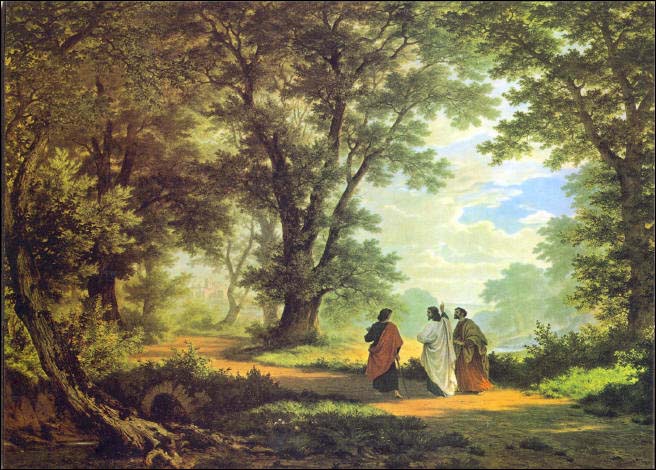 It was impossible for Christ to be held by death because Christ is life. How can life be held by death? The joke is on death, death thought it had the upper hand in swallowing up Jesus… but it didn’t perceive the sign of Jonah! Instead, “death was swallowed up in victory.” Jesus destroyed death by being consumed by it. In the Eucharist, we receive the antidote to death, we receive the resurrected and living One— the Resurrection and the Life Himself.

They were downcast… perhaps this is why they recognize him. Sometimes sadness weighs down so heavily upon us that we seem to lose the sight of God. But he’s there nonetheless.

Even though we may not perceive it, Jesus comes to walk beside us.

The disciples were going the wrong way––away from Jerusalem. We may be going in the wrong direction, but Jesus comes to meet us where we are in order to steer us in the right direction. This is the reality of, the genius behind, the Incarnation… he meets us where we are.

Jesus explained the Scriptures to them… ultimately, Old Testament only makes sense in and through Jesus. Hearing the Scriptures and their explanation––this is the Liturgy of the word.

Stay with us… they were miles away from Jerusalem and it was late. Even though he disappeared, he remained with them. This is the Liturgy of the Eucharist. The whole account of the road to Emmaus is the pattern of the Mass.

They were miles away and it would have been quite dark by the time they would have reached. And yet they were not afraid… since they encountered Jesus and he lit the fire in them… the light from the fire that was burning in their hearts from hearing the Word break open the word.

After hearing the gospel and receiving the Gospel, literally and concretely in the Eucharist, we’re fully disposed to spread the gospel, unafraid of the darkness. I had never thought of it, but it is so true: that very evening, the 2 disciples immediately returned to Jerusalem.

I had never thought of it, but it is so true: that very evening, the 2 disciples immediately returned to Jerusalem.

Because the light is with them.