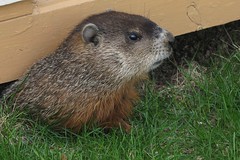 This past February 2nd was Groundhog Day here in the United States. Every winter, people look to a subterranean tunnel dweller to tell them what they hope to hear— that the warmth of spring will soon be upon them.  Unfortunately for them, the groundhog, I believe his name is Phil, saw his shadow on Monday, indicating that there will be 6 more weeks of winter. Thankfully, I don’t put much stock in such predictions––what do groundhogs know anyway. If meteorologists can’t make accurate forecasts, I don’t expect these furry rodent-like creatures to make them. Speaking of Groundhog Day, that is one of my favorite movies on Netflix instant streaming. It’s directed by the late Harold Ramis and stars Bill Murray as an arrogant weatherman, appropriately named Phil. Phil finds himself stuck in Punxsutawney, Pennsylvania (the small town known for the groundhog ritual) on February 2, due to a blizzard that he doesn’t forecast. After checking in to a hotel for the night, he wakes up to the fact that it is February 2 again. Soon, Phil discovers that he is doomed to repeat Groundhog Day over and over and over again. [Spoilers below]

What would you do if you had to relive the same day in a perpetual loop? How would you live it? That’s the basic premise behind the movie. Through much of the movie, Phil, like his namesake, is scared of his own shadow. After several failed suicide attempts, Phil resigns himself to his fate and decides to make the best of his situation. He sets about learning as much as he can about the attractive new weather lady (Andie McDowell) and finding ways of winning her over, but not before pursuing much more selfish goals. In the process of repetitions, Phil embarks on a journey of self-improvement, and lives February 2 to its full potential. It’s a very creative twist of a film and while it falls under the genre of comedy, many sci-fi movies such as Edge of Tomorrow are modeled after it. Sorry about the mild spoilers.

Aside from February 2nd being Groundhog Day, it’s also the Feast of the Presentation of Our Lord in the Temple. This Catholic and Orthodox Feast Day is traditionally the final culmination of the Christmas Season, or Christmas revisited, the 40th day after Christmas. Yeah, we really do our best to try to hold on to Christmas for as long as possible. The origin of the Presentation: According to the Jewish custom, spelled out in the Old Testament, firstborn male children were consecrated, set apart, to God and had to be bought back or redeemed via animal sacrifice ( look for the reason for God to ask for the practice of ritual sacrifice in a future post).  At the same time, the mother had to go through a ritual purification 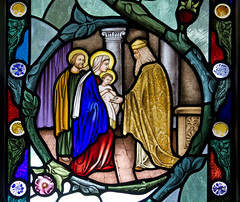 because childbirth rendered her sacred. In the case of Jesus and Mary these things were technically unnecessary; what with one of them being God and the other the Mother of God! Anyway, the Presentation of Jesus has special significance because it marks the day when the Temple’s Lord was found physically and substantially within it. The One long hoped-for made his appearance to deliver people out of the shadow and gloom of sin and death.

Better than Groundhog Day, the Presentation of Christ in the Temple in Jerusalem marks the fact that the cold of winter really is coming to an end, because the Light has come into the world and the darkness cannot ever hope to snuff it out. Jesus seeks out hearts to be enthroned in so that he can enable them to live to their full potential.